I have a tale to tell – a tale of adventure, suspense and many many lulz.

A month ago was my birthday. As many of you know, I love surprises. So when my brother Touie told me to keep the 21st November free for my birthday present without any clues I was ecstatic.

What could it be?! A event, dinner, gig, circus, deep sea diving, lunar trip!! The options endless, as my imagination played with all the possibilities and impossibilities. It provided a few days great entertainment.

Earlier this week he rang to check I was still keeping the evening free, so I started musing again. But I’ve had a lot on, so didn’t really stop to think carefully about what it could be. It only occurred to me to check what was on in Canberra late this evening, but I didn’t want to ruin the surprise.

Touie picked me and we drove to the city. As we got close I was instructed to put my jacket over my head. We pulled up in a car park somewhere and he decided he needed to fashion a real blindfold to improve the surprise. As he started to take off his sock I yelled “hell no!”, and I fashioned a crude blindfold from some duct tape (both my father and brother are refrigeration mechanics, duct tape is always close to hand :)). 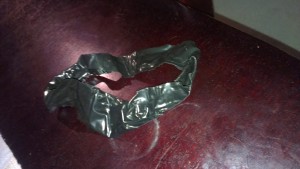 The blindfold went on and I was led about 300m to a venue. Up steps, down steps, across roads, my hearing enhanced by the sudden lack of sight, cars on either side of us and then into a venue. At one point I could swear I could smell circus smells, but I think I was just being ambitious.

People around found it quite entertaining as my brother told them to not give it away. We went to buy some mechandise and the salespeople were telling me I was “going to love it”. I was ordered a small of something whilst I tried to figure out what was going on, and the merchandise turned out to be a tshirt thrust into my hands. So I’m at a gig of some sort? Wasn’t quite ready to let go of the circus idea 🙂

I was led *into* the gig, up and down stairs and when we got to our row the blindfold came off and I was faced by a musician I didn’t recognise on stage, playing random songs. Confused I moved into my seat and tried to figure it out.

I switched on my phone and looked at the front of the shirt. 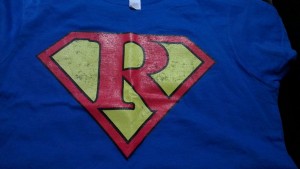 Capital R eh? What the?

Turning the shirt over I struggled to read the text, but when I did… 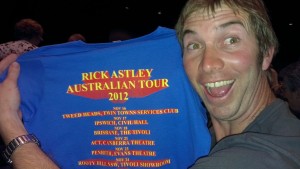 No. Way. No WAY. NOWAY! I laughed in my seat for 10 mins whilst the intro act was on, trying to not be overtly rude. I had been rickrolled in an EPIC fashion. By my brother. I would not live this down.

Then Rick came on, and I have to say, in spite of myself, it was actually a hilarious concert. He’s a funny guy. 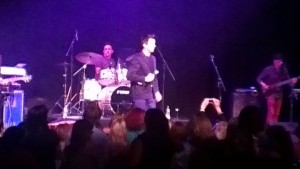 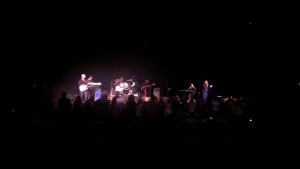 The crowd was full on. It’s a Wednesday night for goodness sake, and we had women (and indeed a few men) throwing themselves on the stage, giving Rick roses, getting up to sing, holding Rick Astley printouts on sticks and some people even brought out their cassettes and vinyl, holding them up whilst singing every word. It was…. intense.

They didn’t play *the* song till last thing in the night, but some of the new songs were actually quite good, he did some excellent covers of motown and old songs, and the biggest moment of cognitive dissonance was Rick Astley, on the drums, playing and singing “Highway to Hell”. Seriously. The sound quality on my phone left a lot to be desired so check this out instead. Prepare for your own cognitive dissonance 🙂

And I still am stunned by the fact I have now been to *AND ENJOYED* a Rick Astley concert. What on earth is going on.

One of his new songs, Superman, wasn’t half bad either.

4 thoughts on “Best. RickRoll. Ever.”