We arrived in Auckland after a fairly difficult flight. Little A had a mild cold and did NOT cope with the cabin pressure well, so there was a lot of walking cuddles around the plane kitchen to not disturb other passengers. After a restful night we picked up our rental car, a roomy 4 wheel drive, and drove to Turangi, a beautiful scenic introduction to our 3 month adventure! Our plan is to spend 3 months in Turing as a bit of a babymoon: to get to know little A as she goes through that lovely 6-9 months development which includes crawling, learning to eat and other fun stuff. We are also planning to catch a LOT of trout (and even keep some!), catch up with some studies and reading, and take the time to plan out the next chapter of our life. I’m also hoping to write a book if I can, but more on that later 🙂

So each week we’ll blog some highlights! Photos will be added every few days to the flickr album. 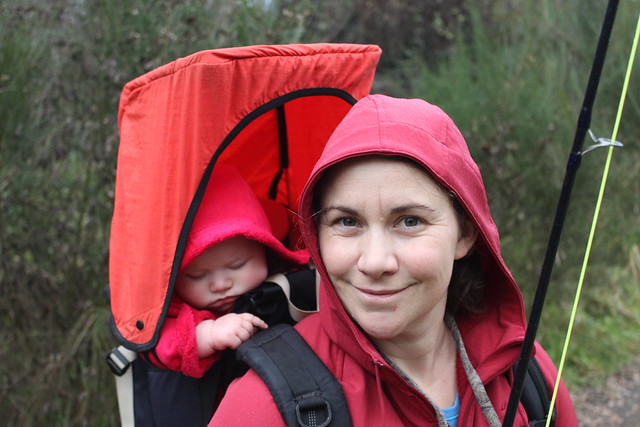 The weather in Turangi has been gorgeous all week. Sunny and much warmer than Canberra, but of course Thomas would rather rain as that would get the Trout moving in the river 🙂 We are renting a 3 bedroom house with woodfire heating which is toasty warm and very comfortable. The only downside is that we have no internet at the house, and the data plan on my phone doesn’t work at all at the house. So we are fairly offline, which has its pros and cons 🙂 Good for relaxing, reflection, studying, writing and planning. Bad for Pia who feels like she has lost a limb! Meanwhile, the local library has reasonable WiFi and we have become a regular visitors.

Little A has made some new steps this week. She learned how to do raspberries, which she now does frequently. She also rolled over completely unassisted for the first time and spends a lot of time trying to roll more. Finally, she decided she wanted to start on solids. We know this because when Thomas was holding her whilst eating a banana, he turned away for a second to speak to me and she launched herself onto the banana, gumming furiously! So we have now tried some mashed potato, pumpkin and some water from the sippy cup. In all cases she insists on grabbing the spoon or sippy cup to feed herself.

Both of us are doing some extra studies whilst on this trip. I’m finishing off my degree this semester with a subject on policy and law, and another on white collar crime. Both are fascinating! Thomas is reading up on some areas of law he wants to brush up on for work and fun.

My book preparations are going well, and I will be blogging about that in a few weeks once I get a bit more done. Basically I’m writing a book about the history and future of our species, focusing on the major philosophical and technological changes that have come and are coming, and the key things we need to carefully think about and change if we are to take advantage of how the world itself has fundamentally changed. It is a culmination of things I’ve been thinking about and exploring for the last 15 years, so I hope it proves useful in making a better world for everyone 🙂

Part of the reason we have based this little sabbatical at Turangi is because it is arguably the best Trout fishing in the world, and is one of Thomas’ favourite places. It is a quaint and sleepy little country town with everything we need. The season hasn’t really kicked off yet and the fish aren’t running upstream yet, but we still netted 12 fish this week, of which we kept one Rainbow Trout for a delicious meal of Manuka smoked fish 🙂